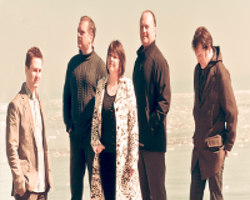 × THE BARRA MacNEILS On The Bright Side

The Barra MacNeils are touring this spring in support of their latest release On The Bright Side, an exquisite collection of everything their fans love. It's an upbeat album, with fiddle tunes that you know will erupt into a flurry of step-dancing on stage. When Lucy sings the heart-wrenching Ribhinn Donn, whether or not you 'have the Gaelic', have a tissue handy. You'll need it. The distinctive family harmonies; an array of rhythmic instruments weaving through and around various themes—some decidedly classical but then, suddenly, very traditional Cape Breton; the lads singing a cappella; a thoughtful solo gradually merging into a frenzied all-hands-on-deck medley … it exudes the passion and energy familiar to anyone who has ever experienced The Barra MacNeils stage show. For the unfamiliar, critical acclaim says it all: “a treasure of the East Coast, rich with tradition and unmatched in ensemble performance.” … “The Barra MacNeils capture the feeling of 'close your eyes and you're there'.” … “They play what they like and folks like what they play.” … “Moments of beauty as well as raucous memories like this can linger forever.”

As always, the five MacNeil siblings—Lucy, Boyd, Stewart, Kyle and Sheumas—combine on a vast array of instruments including accordian, guitar, piano, fiddle, bodhran, mandolin, banjo, Celtic harp, tin whistles, bouzouki, flute … underpinned by the nimble-fingered Jamie Gatti on bass. If you’ve ever been wowed by their Christmas show, be prepared to have the wow factor raised exponentially as the band is unleashed from the strictures of the season. “Nothing but dumbstruck awe.” Don’t miss On The Bright Side with The Barra MacNeils!