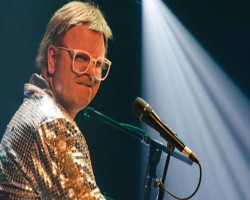 × Returning to our Performing Arts Centre, Elton Rohn is back! He brings his outstanding group of musicians to our stage on Saturday Oct 26 for a night of the best of Elton John.

Elton Rohn has elevated to become one of the elite tributes in North America. Hailing from Toronto, Canada, they have headlined over 300 theatre and festival shows in North America… all the way from Las Vegas to Atlantic City, California, Chicago, Philadelphia, New York, Myrtle Beach, Pennsylvania, all across Michigan and upstate New York and across Canada. They were the only Elton John tribute asked to play the Elton John convention in Las Vegas where they met the band. Davey Johnstone (Elton’s long time guitarist and musical director) told the band they were the best 70’s Elton John tribute in the world. Nigel Olsson ( Elton’s long time drummer) said “Elton has a twin”. This is not an impersonator act, It’s like seeing another Elton John. The music is played 100% live. The musicianship is of the elite level The sequins are there but no gimmicks or feather boas, it’s a solid band. One trip to the band’s website and you’ll see hundreds of testimonials stating just how great this show is. The band has a 90%+ return rate to the venues and places they’ve played. That in itself attests to just how popular the show is. Audiences are amazed at how close this show sounds to the real Elton John. As Elton, Ron Camilleri has the vocal, the piano , the look and the feel of the real Elton John performance. You’ll feel like you are watching the real Elton John.The Passion, energy and those incredible harmonies. All live, the band is the closest you’ll get to a real 70’s sound Elton John show.