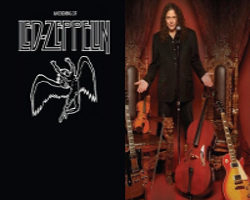 × Led Zeppelin’s music will echo through Brockville’s most prestigious venue when Michael White & The White bring the sounds of Zeppelin to the Brockville Arts Centre. This performance will feature the best of Led Zeppelin’s transcendent music, as well as incorporating an incredible multimedia visual extravaganza on a big screen backdrop. This classic rock live concert will have even the most ardent Led Zeppelin fans cheering for more. After Beatlemania, The White was the first musical group to be known as a tribute band. Mr. White formed “The White” in 1977 and, since then, the group has played over 5,000 shows to over a million fans around the world. Don’t miss Michael White & The White when they take the stage to perform classic Led Zeppelin hits like never before!